Buffalo Grove (IL) firefighters and police officers were sent to 1011 Aspen Drive late Monday afternoon for a worker that was reported to be trapped in a hole in the front yard. Workers had been digging apparently to repair a residential sewer service at the home where one worker was in the hole and there was a ground collapse.

TRT techs arrived and worked for over an hour to free the worker from the collapse. A special call was made for a sewer vac, but the rescue was completed before the unit arrived. The victim, who did not survive, was transported to an area hospital.

Chicago firefighters battled a 3-11 Alarm fire in a commercial building with a bow-string truss roof at 3040 W. Lawrence Avenue late morning and into the afternoon on Tuesday 3/22/22.

Just before 2:00PM on Thursday, (4/22/21) fire companies from Long Grove, Buffalo Grove, Palatine, Lake Zurich, Prospect Heights, Mundelein, the Countryside FPD, the Lincolnshire-Riverwoods FPD, Barrington, and Elk Grove Township were dispatched for a house fire at 3159 Cuba Road in Long Grove. Initial reports were of fire on the roof that the resident was attempting to extinguish. The 6,000 square foot home with a cedar shake roof is located roughly 1,000 feet from the road with a winding driveway and wooden bridge for access.

A dispatcher notified responding units that the homeowner had reportedly reentered the home, but was outside again when the first units arrived. Long Grove units saw fire from the attic in front of the house and from the rear as well upon conducting an initial size up. The alarm was upgraded to a working fire bringing more resources including several additional tankers.

An interior attack was made and found heavy fire inside the home before firefighters were forced to retreat and change to defensive operations. Long Grove Tanker 55 with 3,000 gallons of water and Squad 55 with 730 gallons were both in the driveway followed shortly thereafter by Lake Zurich Engine 324 with another 750 gallons after they dropped 750′ of 5″ hose up the driveway on their way in. The alarm was upgraded to a MABAS Box Alarm which later was upgraded to a 2nd and then a 3rd Alarm.

A deck gun was used to attack the fire until the initial 4800-gallon combined water supply was depleted while additional companies initiated a water supply from the street. Tankers shuttled water from two fill sites, one east and the other from the west.

At one point ammunition inside was heard exploding. Embers from the fire spread to the east starting several small brush fires. The wind-driven fire spread quickly and totally consumed the house which was completely destroyed. 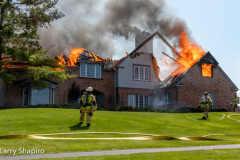 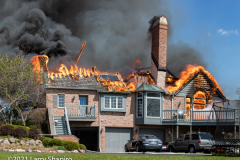 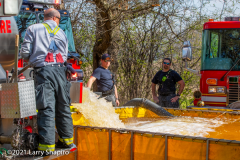 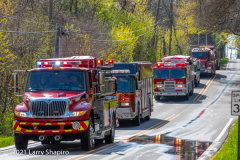 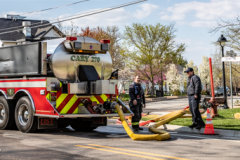 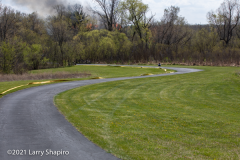 more photos at Chicagoareafire.com/blog and HERE

Northwest Central Dispatch received a call around noon on Monday (2/1/21) from a resident reporting a neighbor’s house on fire at 605 Patton Drive in Buffalo Grove, IL. Arriving fire companies had flames and heavy smoke through the roof of a small, split-level house. The first unit on scene, Tower 25, initiated a transitional attack from the rear of the house as other companies arrived and began pulling additional lines. Buffalo Grove engine 26 and Arlington Heights Engine 4 were the next to arrive followed by Palatine Engine 82, several ambulances, and chief officers.

Three hand lines were stretched for an interior attack of the fire that was in the attic and second floor, the bulk of which was extinguished within about 15 minutes. 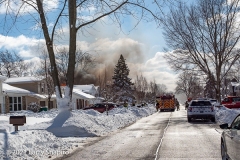 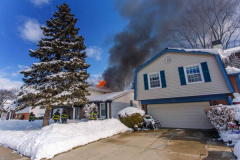 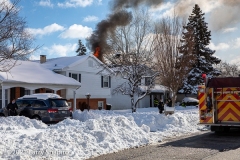 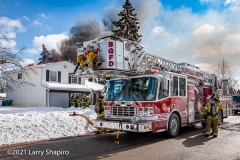 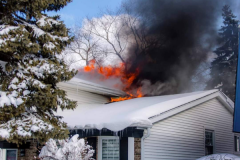 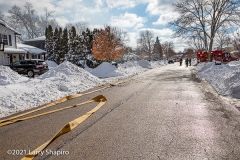 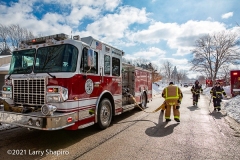 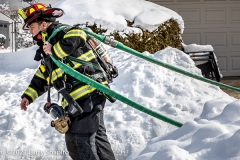 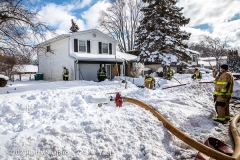 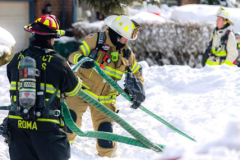 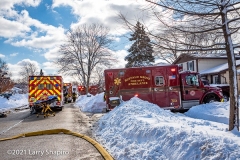 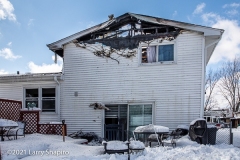 Police officers and firefighters in Winnetka, IL were dispatched for a reported house fire before 1PM on Wednesday (9/2/20) at 614 Pine Lane. Battalion 28 was first on the scene and reported flames showing from the C-Sector. The alarm was upgraded to a working fire for additional resources. Glencoe Engine 30 stretched 400′ of 5″ to a hydrant on the cross street and then supplied Winnetka Engine 28 through another 400′ that they dropped. Several lines were stretched into the house as companies attacked heavy fire in the attic. Additional lines were positioned around the exterior of the building as well.

The alarm was upgraded to a MABAS Box Alarm at roughly the 20-minute mark. The fire vented through the roof in at least three areas. In addition to the interior lines, a cellar nozzle was inserted from the roof into one of the openings and then reapplied into a second area. The fire was brought under control without extending much beyond the attic spaces.

Buffalo Grove (IL) police and firefighters were called to 25 Dellmont Court today (8/26/20) for a house fire. First arriving units had fire from a roof vent of a two-story, single-family house. The alarm was upgraded to a Code 4 working fire and then to a MABAS Box Alarm for additional resources. Companies advanced several lines into the house and had difficulty gaining access to the attic. The fire self vented through the rear with flames and heavy smoke pushing out. An exterior line was used to darken down the fire before companies were again able to make an interior attack. The alarm was later elevated to a 2nd Alarm for additional manpower due to the excessive heat. Two firefighters were transported from the scene with heat related injuries.

Firefighters battled a stubborn fire that started in the attic after notifying the homeowner who was inside and unaware of the fire at 1318 E. Green Lane in Mount Prospect, IL 6/18/19.