Kitchener Ontario fire dispatch received a call for a basement fire at 603 Mill Park Drive at 1:40 February 15, 2019. P6, P1, A1, R1, and Car 23 were dispatched to the call. P6 arrived on scene and reported they had smoke showing and a 360 showed they had a fire in the basement. Command reported all five students in the basement were out of the house and that the owner of the house was out of town.

Station 7 was added to the call, they were running in the tanker for the shift. Multiple lines were pulled into the building. Crews encountered a very cluttered house, full of furniture on every floor and even the garage was full of furniture which prevented access as it was so full. There were three pianos in the bedrooms on the second floor and an organ in the living room which was not accessible due to all of the furniture.

Firefighters were pulled from the basement due to untenable conditions, and the first floor became well involved minutes later. It was not long before the entire building was alight. Two hydrants were picked up to feed the pumper and aerial. Small and large lines as well as an aerial master stream were used to fight the fire.

Due to the tremendous amount of furniture in the house, it took hours to knock the bulk of the fire down. The day shift replaced the tired crews, and worked till 12:30 to fully extinguish all the spot fires. Due to the severe damage in the house, all overhaul had to be done from outside. Crews even pulled a cellar piercing applicator to use on hot spots. That is the first time I have seen this tool used in 31 years on the canteen. Damage has been set at $800,000, cause has not been determined yet. Box 690 provided breakfast and lunch at the fire. Photos and videos shot 35 minutes into the fire.

Kitchener (ON) fire dispatch 9-1-1 lines lit up at 8:10 August 22, 2018 for an explosion and fire at 56 Sprucedale Crescent on the west side of town. The initial dispatch was for an explosion and possible fire. Two pumps, 100’ quint platform, heavy rescue, and platoon chief were dispatched. Heavy smoke was visible as trucks were responding and a third pumper was requested to the scene.

P5 arrived first and reported debris all over the area with multiple houses on fire and stated they were going to look for victims. Neighbors reported there could be multiple people in the house. The adult male was pulled from the back yard by homeowners bordering the house. They told firefighters there was a female in the ruble at the rear but they couldn’t get to her due to heavy fire. Firefighters found the adult women and pulled her from the debris and reported she was 10-45.

The fire extended into homes on either side of the house that exploded. Two additional pumpers were requested to the scene. Two commands were set up, one to look after the initial house and the house on the E4 side. The second command looked after the well involved house on the E2 side. A sixth pumper was requested a short time later.

Four hydrants were picked up, three on Sprucedale and one on Blackwell Drive where firefighters pulled a 2.5” line into the rear of the fire. Multiple small and large lines as well as the platform attacked the fire from the front. The bulk of the fire was knocked down in 45 minutes on the original home and E4 home. The E2 home had heavy fire throughout the house and eventually fire broke through the steel roof. Firefighters worked for hours on spot fires and securing the scene.

Due to the magnitude of the call, media and helicopters arrived from as far away as Toronto. Kitchener Fire Chief Jon Rehill updated press throughout the day. Sixteen homes were evacuated and gas was shut off to their homes until the source of the blast could be determined. The Ontario Fire Marshall arrived at noon to help in the investigation.

The following day, Regional Police reported they were investigating the fire as a homicide. The adult male was airlifted in critical condition to a Hamilton hospital. Damage will exceed two million dollars. Box 690 provided rehab for nine hours. Photos and video taken 25 minutes into call after rehab was set up.

Kitchener (ON) Fire dispatch received multiple calls for a house fire at 31 Pattandon Ave, 8 September 2018, at 8:40. P1, P3, R1, A2, and Car 23 were dispatched on the first alarm. A contractor working across the street helped the elderly occupant escape the fully charged house with her two dogs before firefighters arrived. P3 arrived on scene first reporting multiple garages, and a large tree on fire in the rear with extension into the house. Crews were split between the garages in the rear and the house. Fire extended into the house through a rear wooden porch. P4 was added to the call as the RIT pumper. Two 2.5” lines were pulled for exposures, a third 2.5” was pulled and split into two 1.5” attack lines, and the two 1.5” bumper attack lines were also deployed. Heavy fire was knocked down in 20 minutes with overhaul taking another two hours. The fire ran up the walls of the house and into the roof necessitating interior and exterior overhaul of the steel roof and interior walls. This was a very hot humid day in southern Ontario with the high reaching 111F. Three additional pumpers and an aerial were dispatched to relieve crews on scene. Box 690 served 134 cold drinks, as well as snacks and lunch. Cooling towels were used by firefighters to cool down. Photos taken half an hour into the fire after setting up rehab. Damage estimates will exceed $250,000, cause still under investigation. Fire started in the rear beside one of the garages. 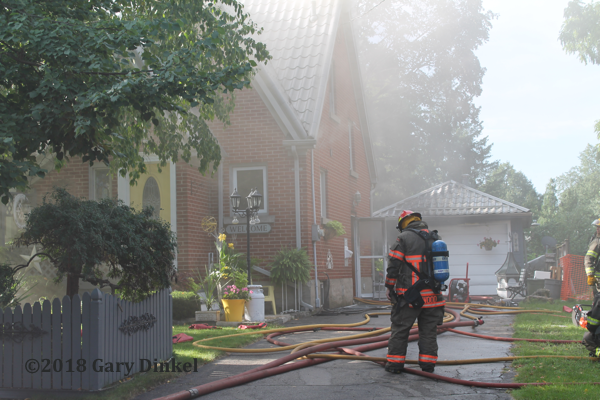 Kitchener (ON) fire dispatch received a 9-1-1 call for a house fire at 1242 King Street East July 13, 2018 at 00:37. P3, P4, A1, R1, and Car 23 were dispatched to the call. P3 arrived on scene reporting heavy fire venting 30 feet out the E2-E3 corner of the two-story house. Live wires were hanging down across the street preventing the quint from setting up in front of the house. P4 picked up a hydrant on the way for P3. Hydro was cut to the entire area to allow firefighters to enter the house. Crews pulled numerous lines from both pumpers to attack the fire. Interior crews were able to knock the fire down on the main floor and perform primary searches of the basement and main floor. Heavy fire and high heat prevented searching the second floor. Firefighters were pulled out to go defensive. P3 set up their aerial to attack the fire venting out the roof. The fire was knocked down approximately an hour after pulling out. Portions of the roof collapsed, but since firefighters were all exterior there were no injuries. Damaged was pegged at $500,000, no cause has been released at this time. Box 690 provided rehab on this warm summers night. 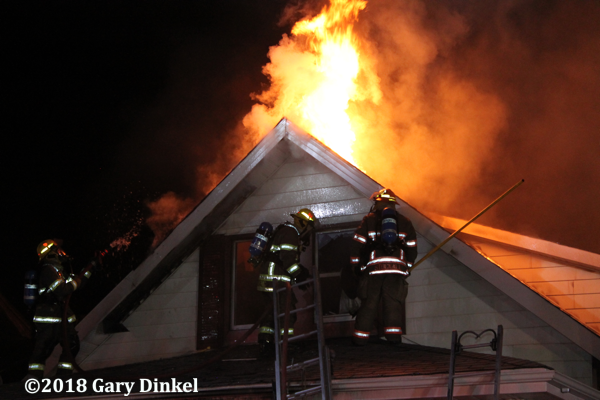 Kitchener (On) fire dispatch toned out P2, A2, P3, R1, and Car 23 for an alarm ringing at 9 Bingeman Street May 5 at 9:00. P2 arrived and reported nothing visible. A quick 360 changed the report to a working fire with flames visible at the rear of the apartment. P1 was added to the call at this time. P2 pulled two 1.5” lines in the front while P3 pulled a line to the rear and up the stairs to fight the fire. Crews had a quick knock on the fire, and firefighters were able to get the pets out of the second floor. The fire was contained to the second floor with smoke and water damage to the attic and main floor. Box 690 provided rehab, shots taken 15 minutes into the fire. 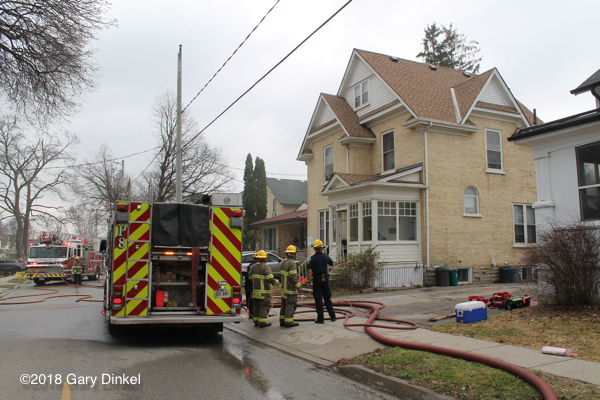 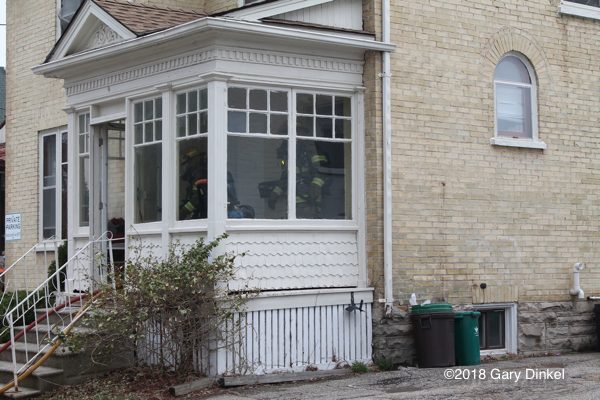 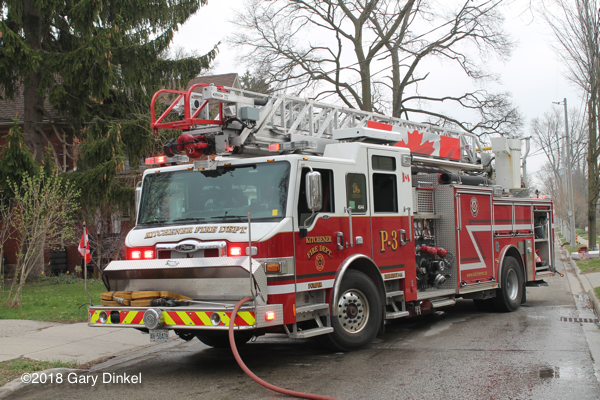 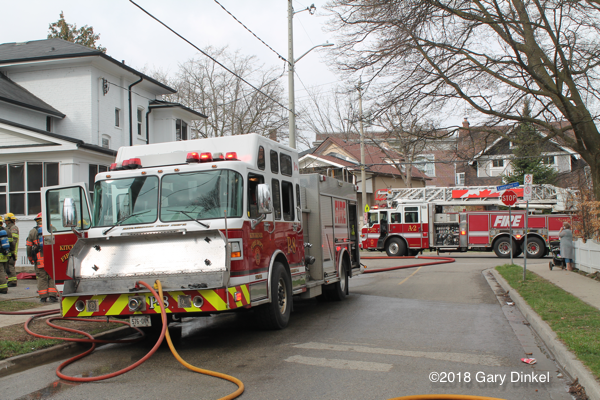 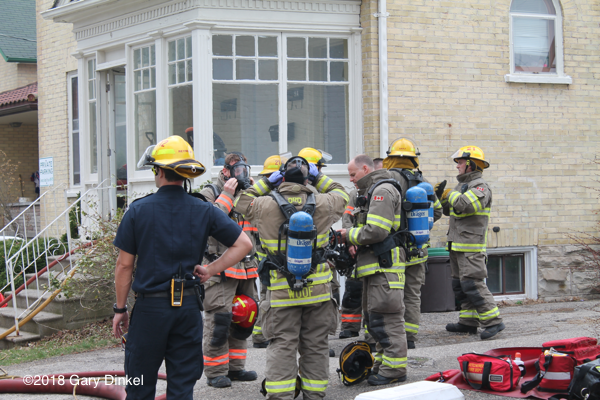 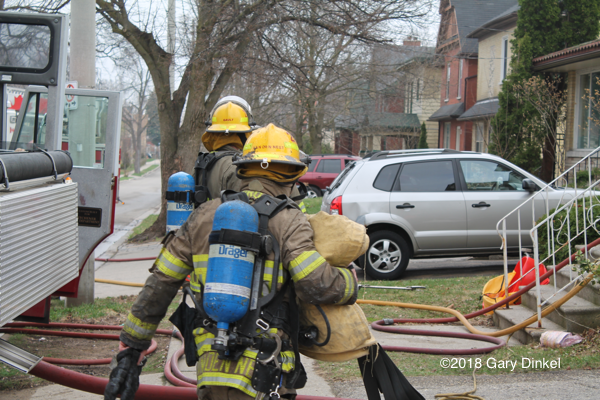 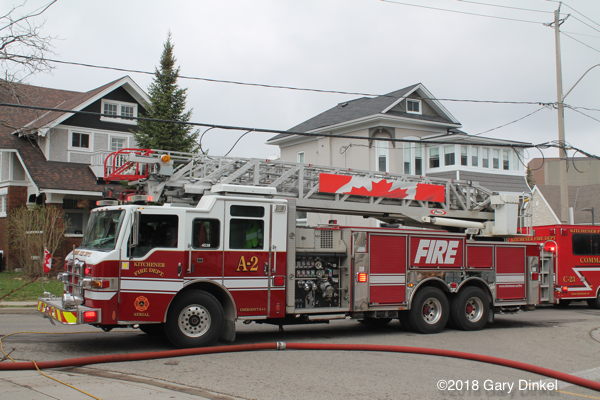 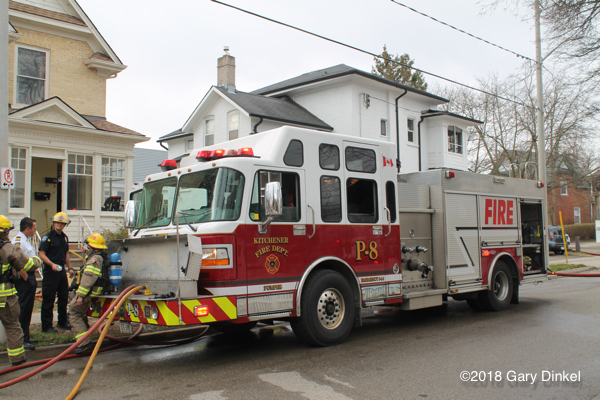 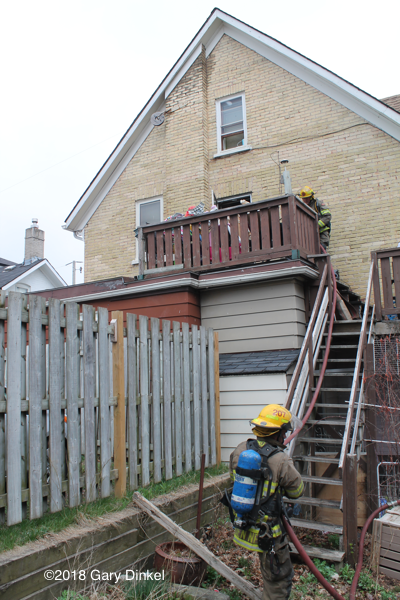 Kitchener, Ontario fire dispatch received multiple calls for smoke coming from a house at 711 Westmount Road, February 3, 2018 at 14:00. P5, P2, A2, R1, and Car 23 were dispatched on the first alarm. P5 reported heavy smoke and flames showing from the roof on arrival. P1 was added to the call on this report. A passerby alerted the occupants that their house was on fire. A new roof was being constructed over the existing roof. The fire started in the void between the two roofs at the chimney for the wood fireplace. The fire was knocked down in 20 minutes with extensive overhaul to the roof. Damage has been set at $300,000. 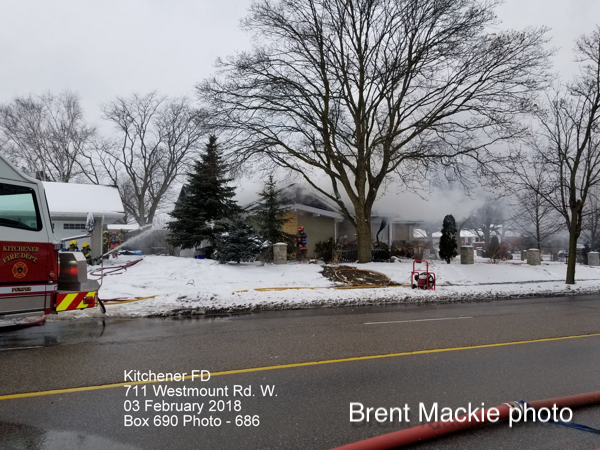 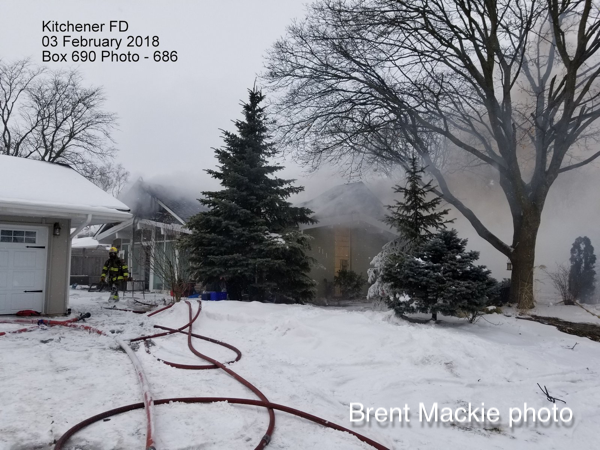 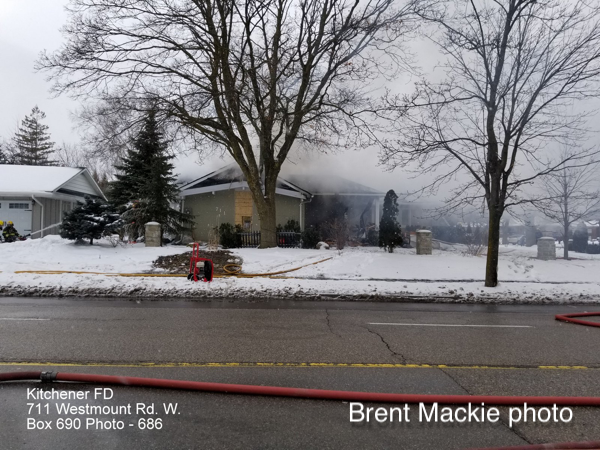 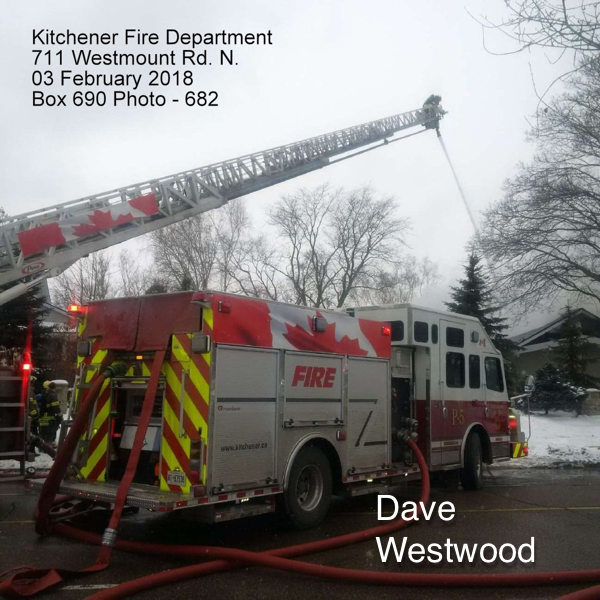 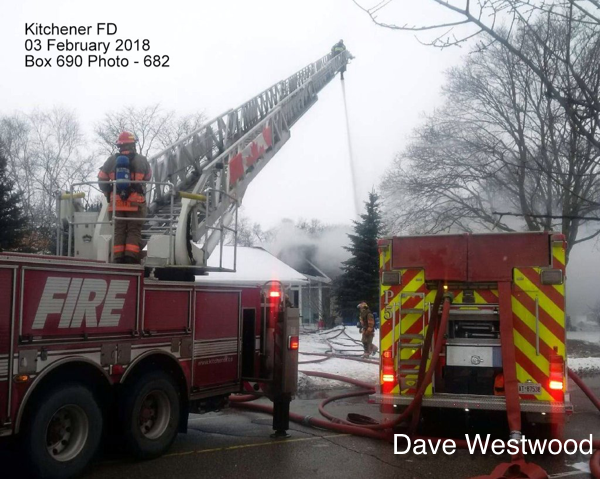 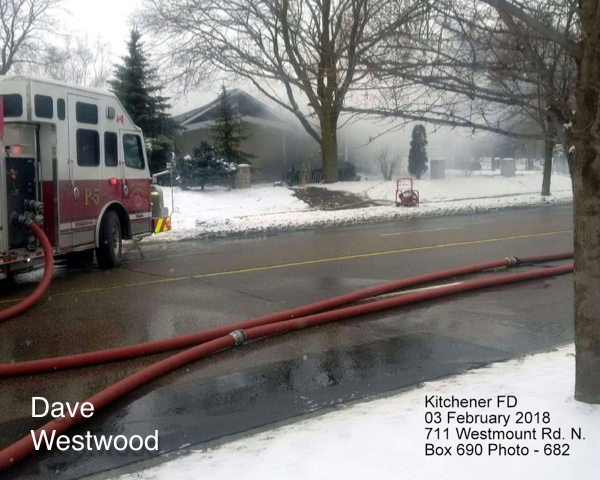 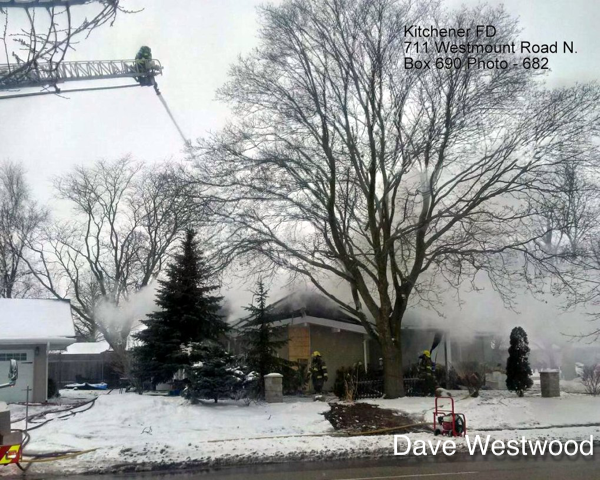 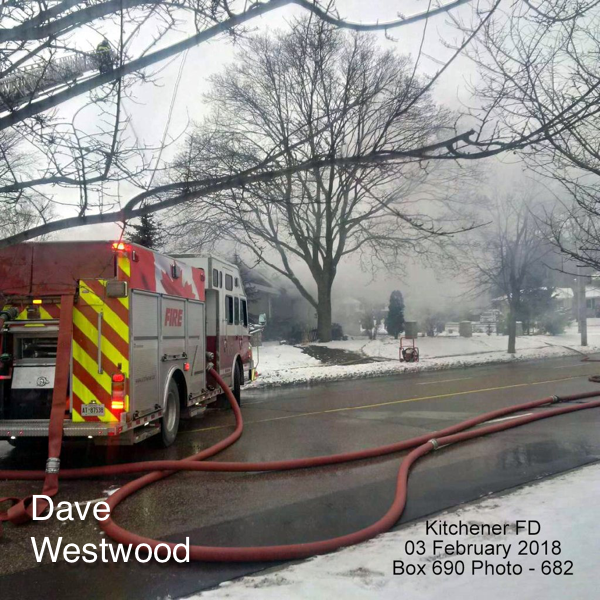 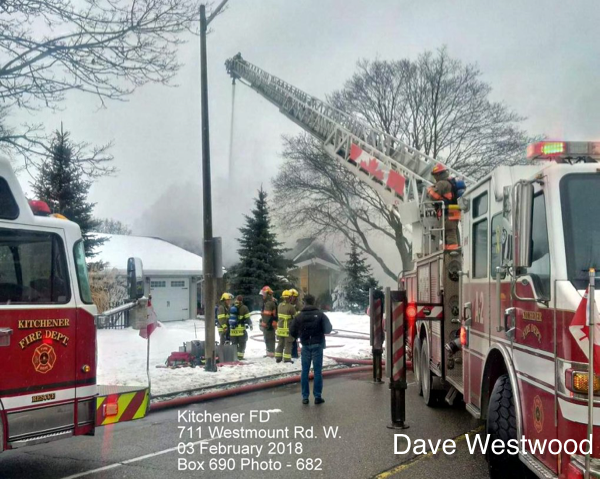 Kitchener ON, fire dispatch received 19, 9-1-1 calls reporting a house fire at 66 West Ave at 8:38 June 13, 2017. P2, A2, P5, R1 and Car 23 were dispatched to a confirmed structure fire. Responding crews all reported smoke showing as they left their stations. P1 and A1 were added to the call before P2 arrived on scene. Pump 2 arrived to a fully-involved, empty, story and a half house with extension into occupied houses on either side. Large and small lines plus a monitor were quickly deployed to attack the fire.

The bulk of the fire was knocked down in 25 minutes. The house on the E2 side of the fire had a steel roof which made accessing the attic very difficult. Firefighters cut a large hole in the front of the house to gain access to fight the attic fire. Another team of firefighters entered the house on the E4 side to extinguish a fire in the upstairs bedroom. P7 was added to the call for manpower. I was at an appointment and got to the fire a half an hour in. Box 690 provided rehab, our third call in less than 24 hours, having responded to a house fire in Cambridge the previous night, and a Waterloo gas leak the previous morning.

Short pre arrival shot of the fire from YouTube 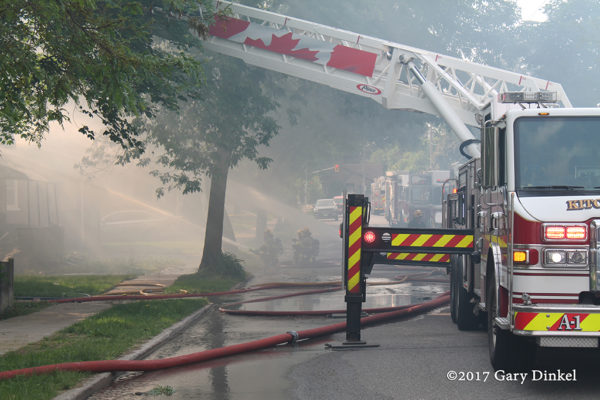 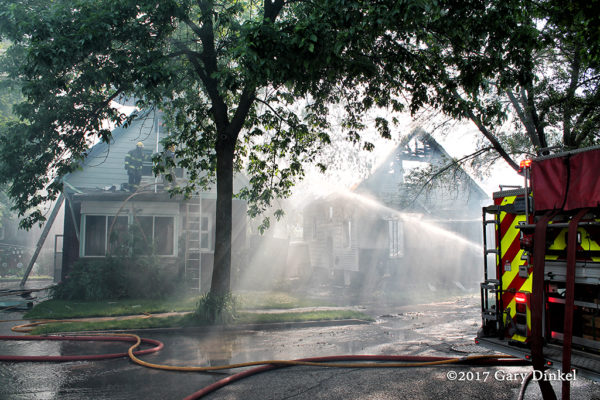 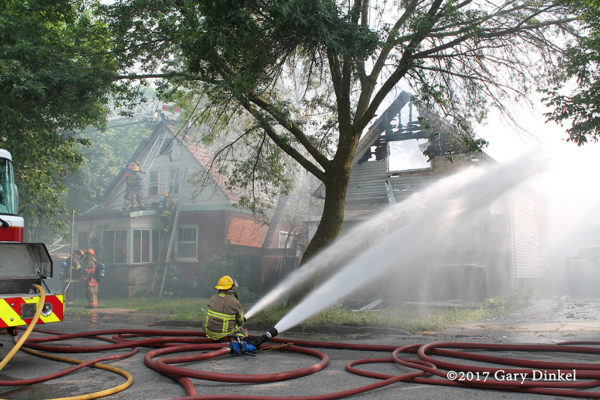 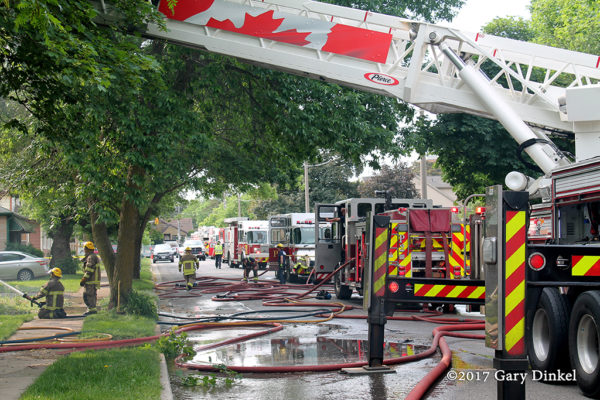 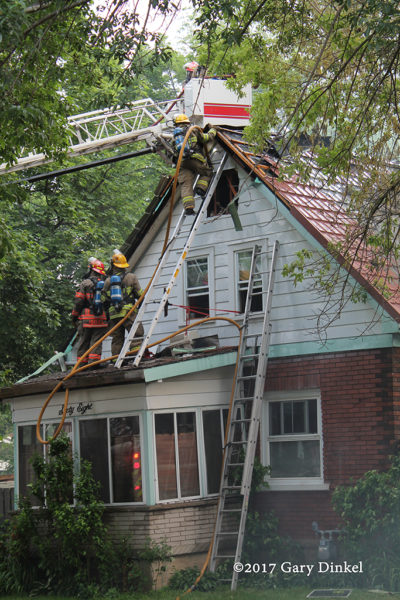 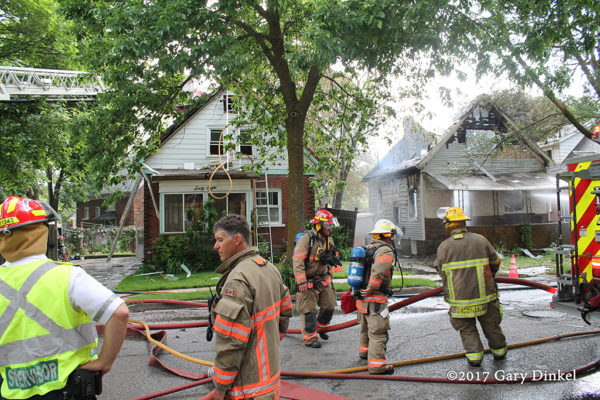 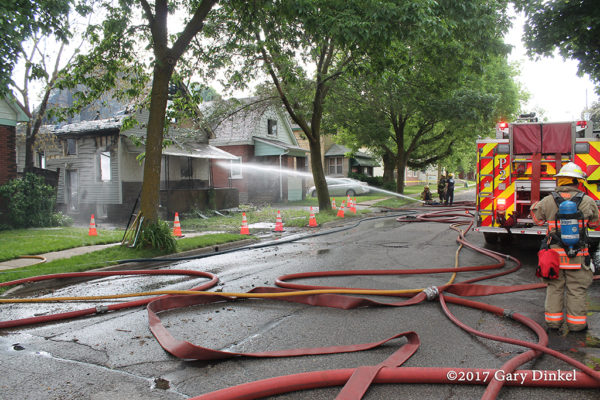 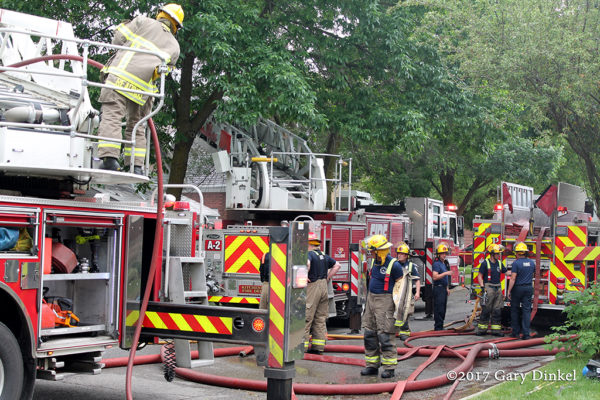 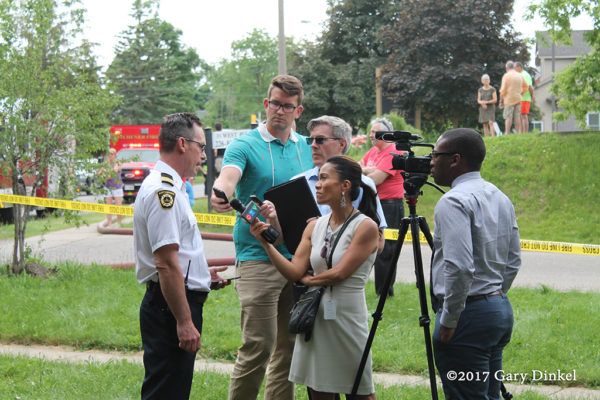 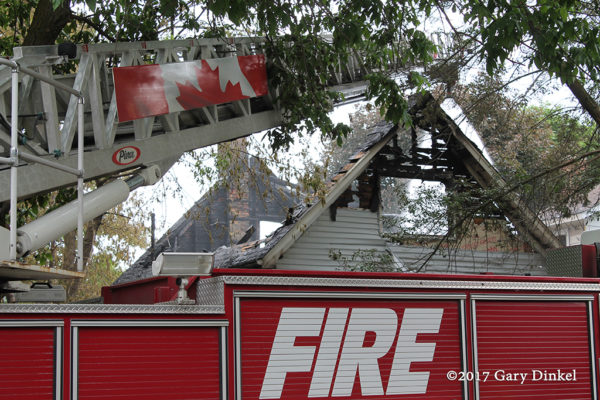