At 18:54 on 12/12/19, a passerby reported to 9-1-1 that a building on the property of Clean Management at 915 Industrial Road north of Walterboro was on fire, with flames coming from the building. Colleton County (SC) Fire-Rescue Engine 19, stationed less than a mile away, arrived within minutes, to find heavy fire conditions in a storage and processing building. Most of the structure was a large open air canopy style building used for storing and neutralizing industrial waste. The building also contained several offices, file, and break rooms. The building contained hundreds of 55-gallon steel drums and plastic containers of varying products. First arriving units requested a second alarm, then deployed multiple 2-1/2 and 1-3/4 handlines. Two drop tanks were set up for water supply with tenders shuttling water for the firefighting effort. Firefighters cut a section from the fence surrounding the property to gain access to the building and forced entry through the front and a side door.

Crews worked for 40 minutes to gain control of the fire and were at the scene for five hours performing overhaul. Much of the product was saved, but the building suffered extensive damage. The area over the offices also received heavy damage, but the interior of the building was saved, receiving mostly smoke and water damage. Several pieces of heavy equipment were also destroyed or damaged in the fire. Two firefighters were transported to Colleton Medical Center for evaluation following exposure to one of the substances, upon the recommendation of Chemtrec. Both were treated and released the following morning. Viewing surveillance video, it appears the fire started near a piece of heavy equipment parked in the middle of the facility about 30 minutes after the business closed. The fire quickly spread from there to the other parts of the building.

A large workshop was destroyed in an afternoon fire at 2257 Mount Carmel Road Wednesday 08-March at 13:56. The caller to 9-1-1 reported a trash fire had gotten out of control and spread to the building. Colleton County (SC) Engine 26 arrived minutes later to find fire at the rear of the approx. 50’ x 160’ structure and deployed handlines to the building.

The building housed several vehicles and was used to repair equipment and trucks. It was located approx. ½ mile off of Mt. Carmel Road down a dirt driveway. While maneuvering handlines, a series of explosions occurred in the building which quickly spread the fire throughout the structure. Responding units could see a thick plume of black smoke five miles away.

Engine 26 requested a second alarm and deployed three 1-3/4s, one 2-1/2 straight bore, and the deck gun. Engine 1 set up on the west side of the building and deployed one 2-1/2 Blitzfire. A tractor from the Forestry Commission was also requested for the brush fire. Firefighters worked for 40 minutes to bring the blaze under control.

Several vehicles including a dump truck were damaged or destroyed, the building was completely destroyed. A tractor, some farm implement,s and several thousand dollars worth of tools were also destroyed. Units were on the scene for four hours. Water supply was handled with a tender shuttle. 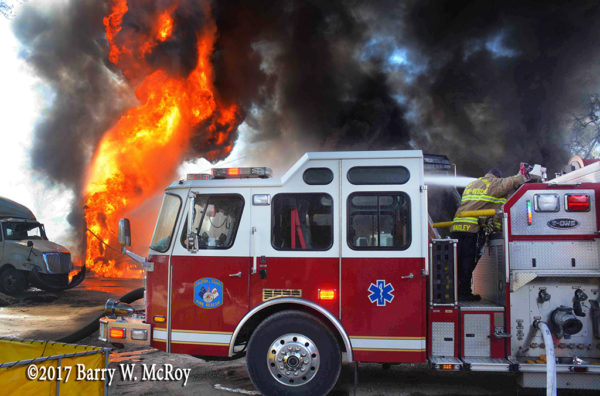 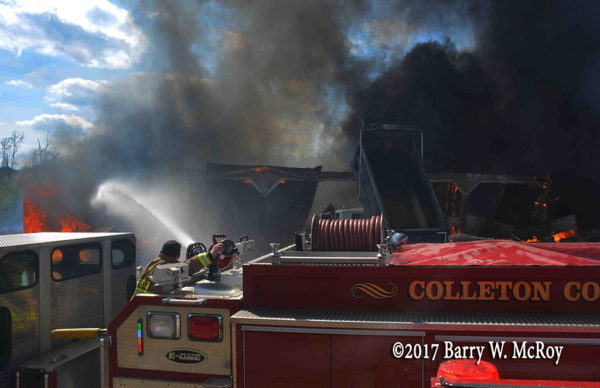 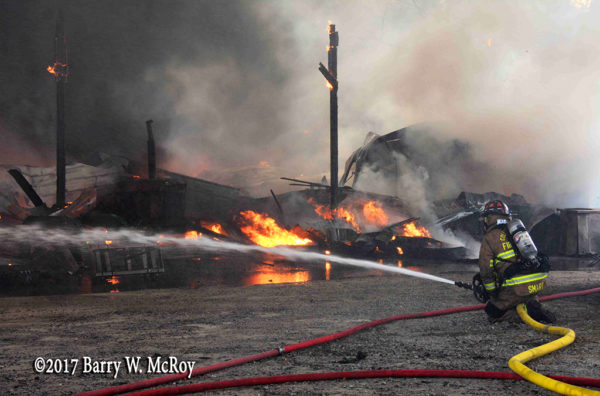 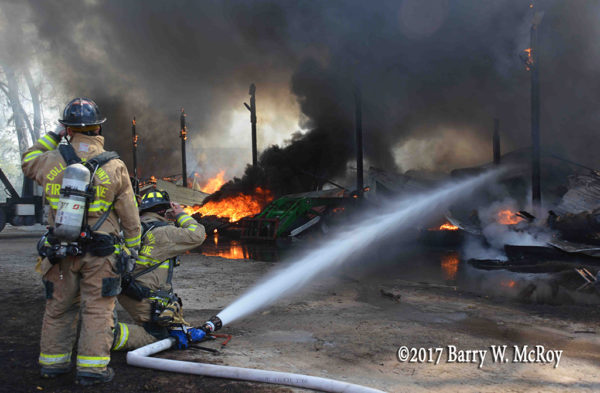 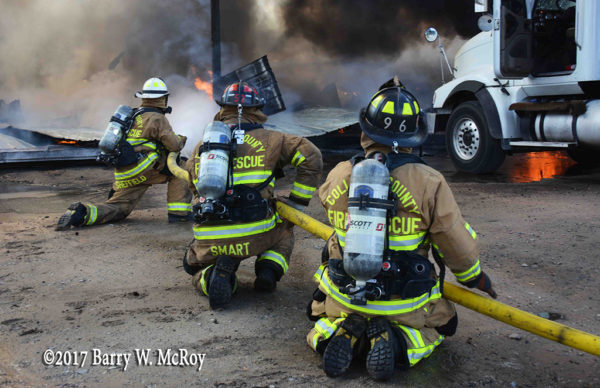 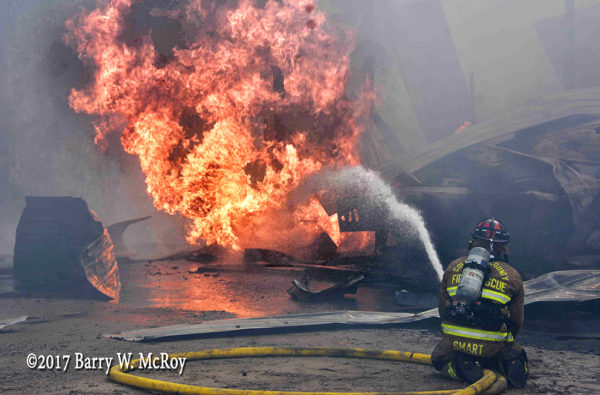 A Walterboro (SC) family lost their home to an early morning fire Monday, 17-Oct. The fire was reported to 9-1-1 at 02:38 when the family went to a neighbor’s home to ask for help. Colleton County (SC) Fire-Rescue units arrived 8 minutes later to find the single-story dwelling fully involved. All occupants had safely exited the structure.

The home was located well off the roadway and Engine 19 backed down the long driveway. A supply line was stretched to the road so tenders could supply the engine. Firefighter-Paramedics deployed multiple handlines to combat the fire. A blitzfire device was set up in the back of the residence. A second alarm was issued shortly after arrival for additional tenders and personnel.

Crews had the bulk of the fire knocked down within 30 minutes, but were on the scene five hours. The rear of the building was destroyed, with much of the interior being gutted. Most personal items were lost. The home was originally a singlewide mobile home that had been doubled in size and had a roof installed over the original building. This hampered extinguishment due to the multiple walls, ceilings, and double roof. The fire appears to have started in the area of the kitchen in the original structure, which spread to the attic space and into the newer addition. Water supply was handled with a tender shuttle from a pressurized hydrant four blocks from the scene. The Red Cross is assisting the family. The cause of the fire is under investigation. 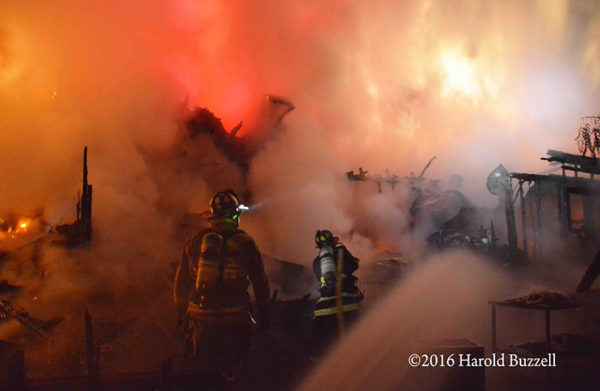 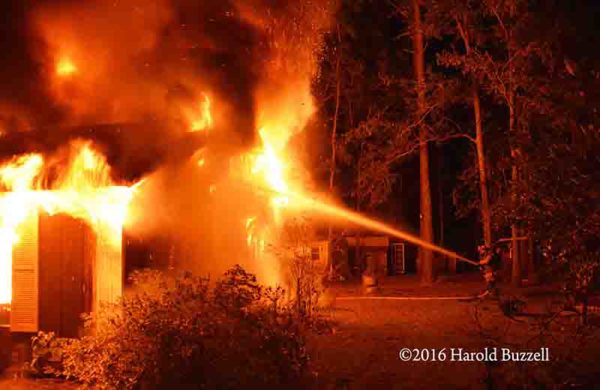 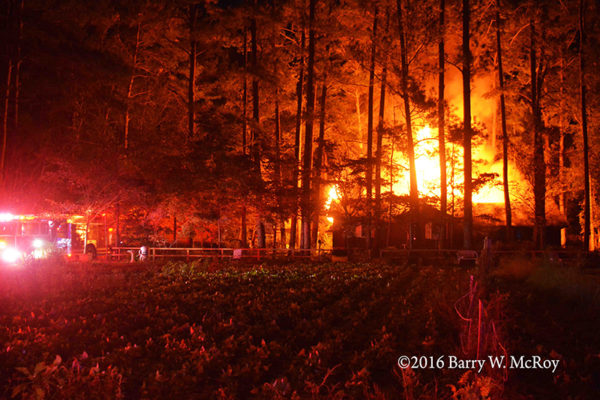 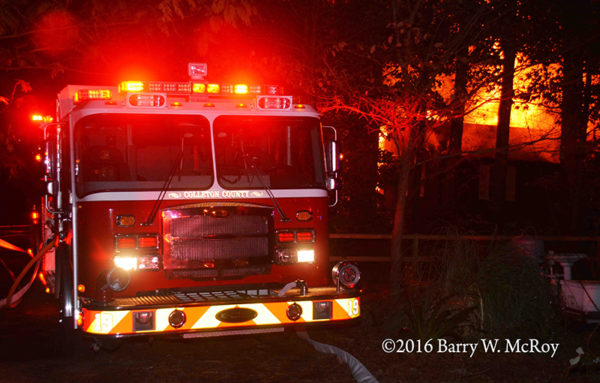 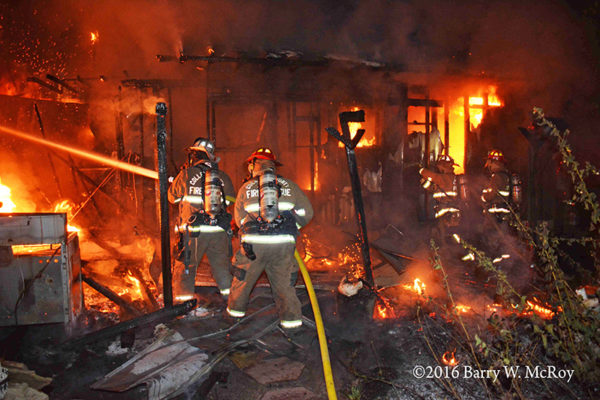 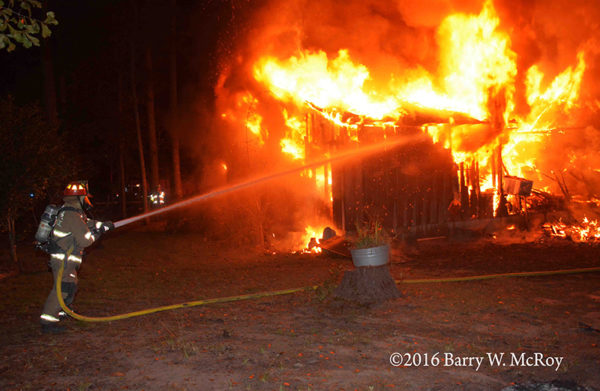 A large portion of a building was destroyed in a mid-morning fire at a closed lumber mill east of Cottageville, SC Saturday morning 09-July. A caller to 9-1-1 reported the building was heavily involved and involved stacks of lumber. Colleton County Fire-Rescue (SC) Engine 9 arrived to find the structure well involved and a portion of the roof had already collapsed.

Firefighters deployed multiple 2-1/2 and 1-3/4 handlines to combat the blaze. A second alarm was requested for additional tenders and personnel. Mutual aid was also requested from Dorchester County Fire-Rescue, who responded with personnel from the Sandhill Station.

The building contained several conveyor systems used to process lumber. When the plant closed over five years ago, the processes were ongoing. Conveyors still contained raw timber (uncut trees), several lines of raw and finished lumber, and approximately a dozen carts for finished lumber stacked five feet in height with wood products. The rear portion of the building was a total loss, including most of the machinery, however firefighters were able to stop the advance of the fire to the front portion of the building, saving half of the structure.

Firefighters endured 104 degree temperatures and were on the scene for 4-1/2 hours.  Water supply was conducted with a water shuttle using a dry hydrant located 2 miles from the scene. There was no power to the building and it is believed the fire started from a lighting strike during a severe thunder storm earlier in the morning. 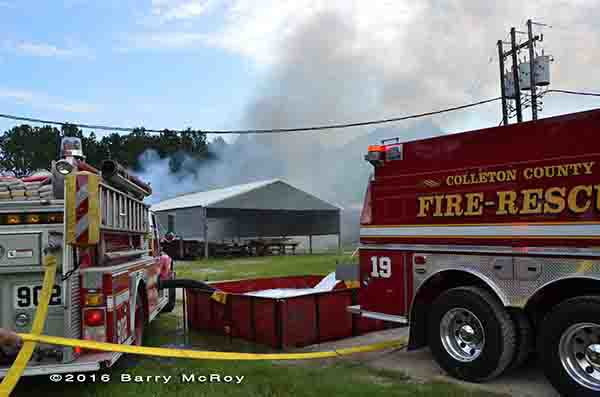 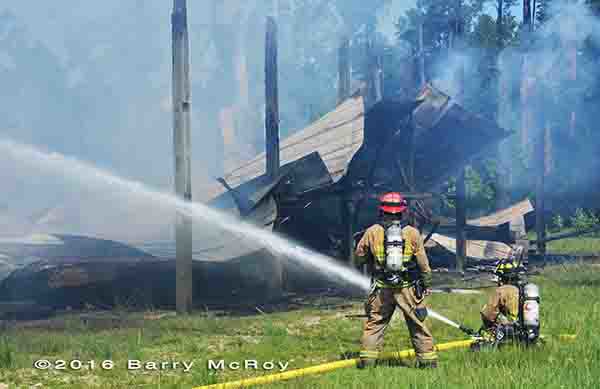 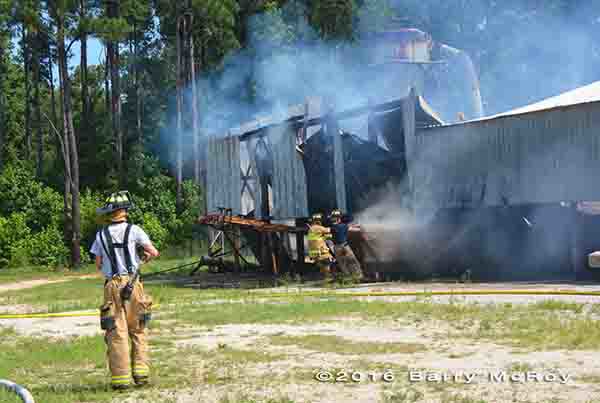 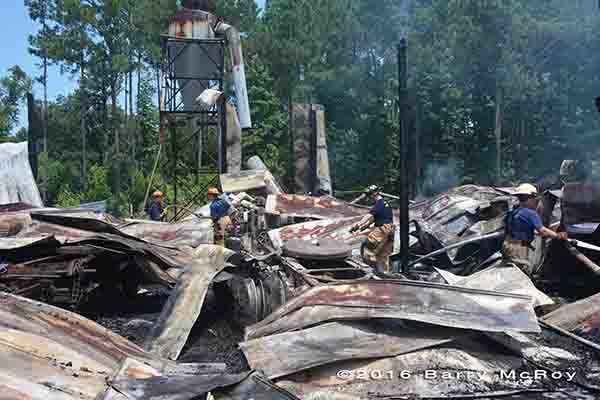