At 3:15 Saturday morning (1/23), companies in Chicago’s 14th Battalion were dispatched to 2213 West Cermak for the reported fire. Engine Company 23 landed a minute later and confirmed a working fire in the rear porches of a 30×70, three-story, ordinary, occupied apartment building. Companies worked for almost 20 minutes to contain the blaze but fire extension into the basement, first, and second floors forced a defensive attack at around 3:35. There was also fire extension into the adjoining “D” side exposure building that was quickly brought under control. Engine 109 worked their deck gun in sector “C” while Squad 1’s Snorkel was set up. Eventually, the fire was put out with several hand lines and master streams from the Snorkel and Tower Ladder 5. Companies worked for over four hours as the thermometer hovered around 10 degrees throughout the duration of the incident. 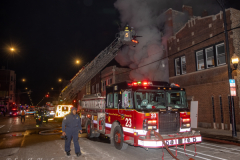 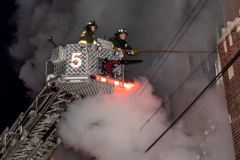 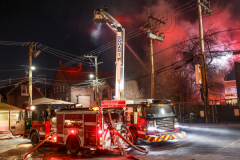 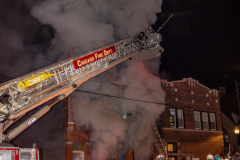 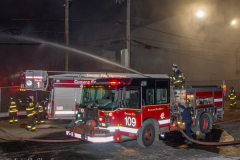