Kitchener Pump 14 , Pump 16, Aerial 11, Rescue 11, and the Platoon chief were dispatched to Costco on King St for a possible fire June 25 at 23:30. Responding firefighters received an update that the fire was at the Value Village across the street on Gateway Park Drive The fire was initially thought to be at the loading dock but it was a trailer on fire. Tower 13 was added to the call on this report.

Pump 14 reported smoke and flames visible as they neared the scene. A 53’ trailer parked in the loading dock was fully-involved only a few feet from the large store, and there were two other nearby trailers. Pump 16 picked up a hydrant for Pump 14, and Aerial 11 picked up a second hydrant at the rear as they pulled in. Crews pulled large lines and set up a blitz fire while Aerial 11 checked the roof.

A passing truck stopped and offered to help by moving the trailer. Command asked the driver to pull the trailer away from the dock. Once the trailer was moved firefighters confirmed there was no extension into the structure. The trailer was full of donations including clothes, toys, and household materials. The fire took a couple of hours to fully extinguish. Due to the trailer being compromised no firefighters were allowed inside it. Box 690 provided rehab to the 19 firefighters on scene. Photos start 15 minutes after crews arrived. 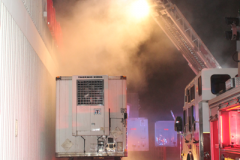 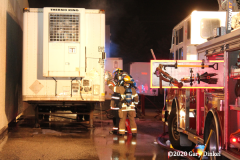 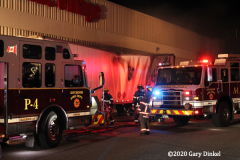 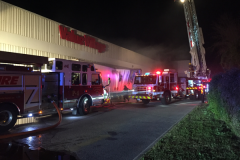 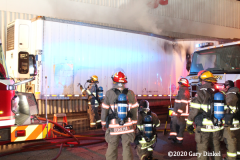 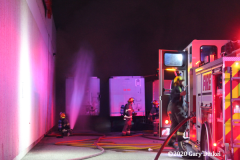