Kitchener (ON) fire dispatch toned out New Dundee Fire for a reported corn field on fire at 2316 Queen Street off Bleams Road, April 25 2020 at 11:45. New Dundee reported they had smoke showing as they left town, and requested a full response from Baden Fire. Once on scene, New Dundee Pump 21 set up in a laneway to the east of the fire. A port-a-tank was setup and lines were pulled to the field.

Tankers shuttled water from a hydrant five miles from the scene. New Hamburg set their pumper and port-a-tank at the northwest side of the fire on Bleams Road and pulled two lines. Command requested a tractor to till the field creating a fire break. The tractor arrived 40 minutes into the fire.

The fire was declared out an hour after crews arrived. Box 690 provided rehab. Five pumpers, four tankers, and one rescue responded to the fire. Kitchener Fire was dispatched to another corn field fire at Trussler Road and Bleams Road, not far from this fire. They had a quick knock down and didn’t require rehab. This was the third large field fire Box 690 has responded to in the last three weeks. Photos taken 25 minutes into the call. 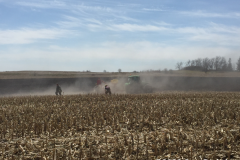 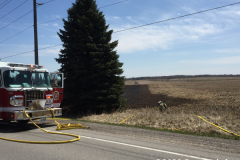 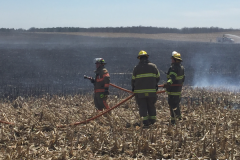 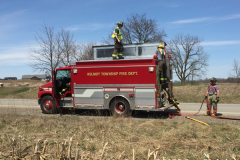