Shortly before 1530hrs on Wednesday, November 27th, companies in Chicago’s 23rd Battalion were dispatched to the report of a garbage can on fire in the rear of a building on the 8000 Block of South Ellis.  While companies were en route, the Englewood Fire Alarm Office informed Engine 122 that they were getting a Full Still as they were getting reports that the rear of the building had become involved.  Very shortly after that, the alarm was elevated to a Still & Box for the reports of people being trapped on the second floor.  Engine 122 arrived on-scene and reported that they had a fire in the rear of a 3-story, 50 x 65 ordinary, occupied apartment building. 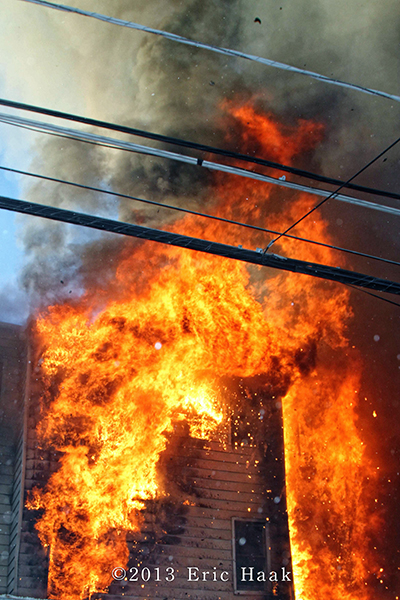 This is before any lines were laid and before Engine 72 arrived. Eric Haak photo 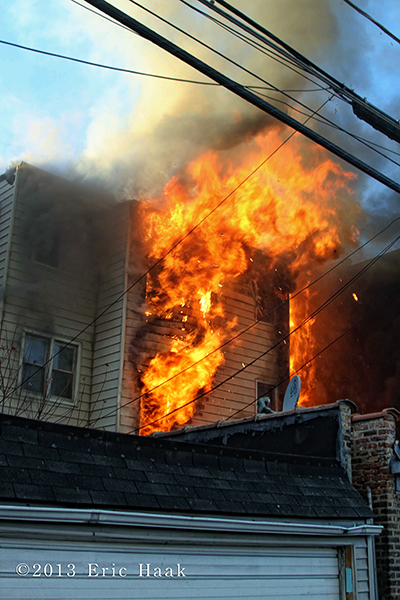 This is also before any lines were laid and before Engine 72 arrived. Eric Haak photo 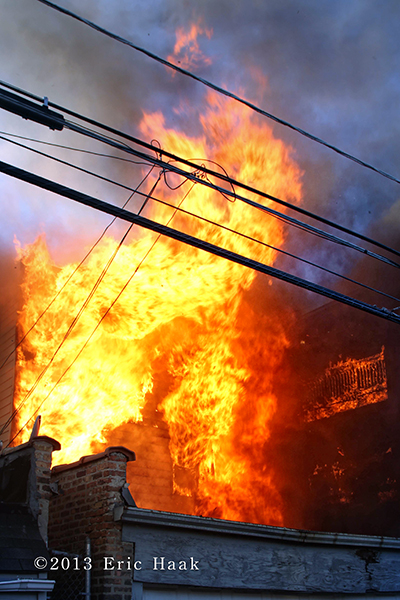 The balconies of the exposure are involved. eric Haak photo

Engine 72 positioned itself at the mouth of the alley on 80th Street and led out several lines to sector 3.  The first several images were before any lines were laid and before Engine 72 arrived.  You can see that the balconies of the sector 2 exposure were involved and the volume of fire between these two buildings was very heavy, which led to the 2-11.  The sector 2 exposure was a large 100 x 75 U-shaped courtyard apartment building.  The fire consumed the rear porches of the fire building very quickly and the entire rear of the structure collapsed into the yard. 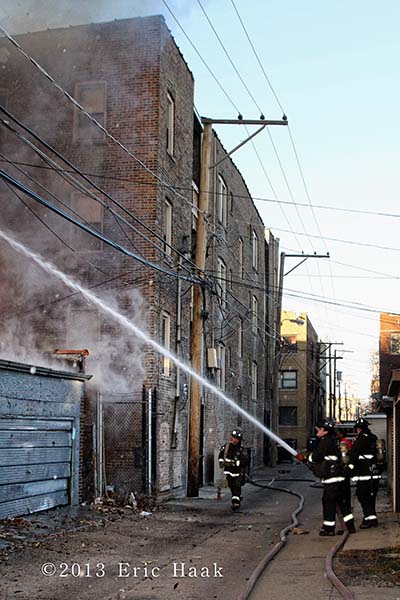 Engine 72 gets the first line operating while a second is stretched. Eric Haak photo 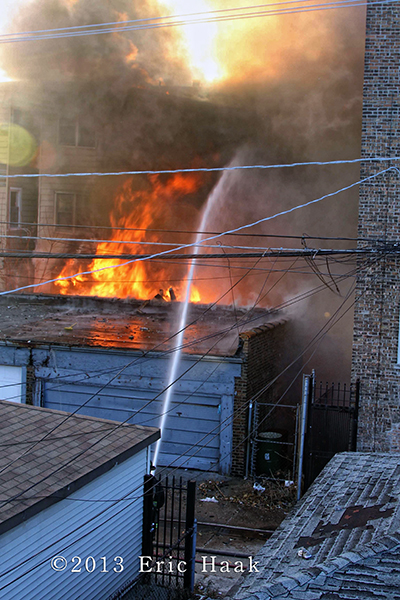 Back porch collapses into the yard between the building and garage. Eric Haak photo 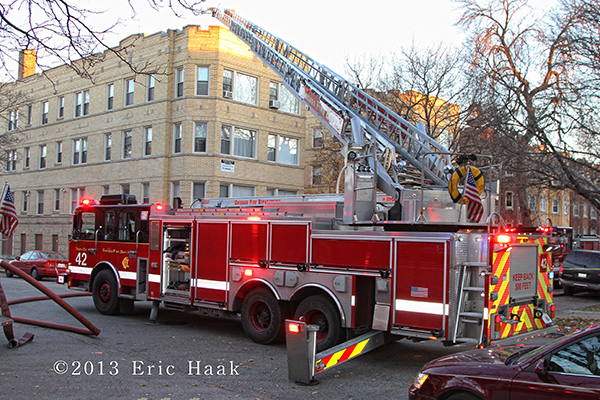 Truck 42 with a main to the sector 2 exposure. eric Haak photo 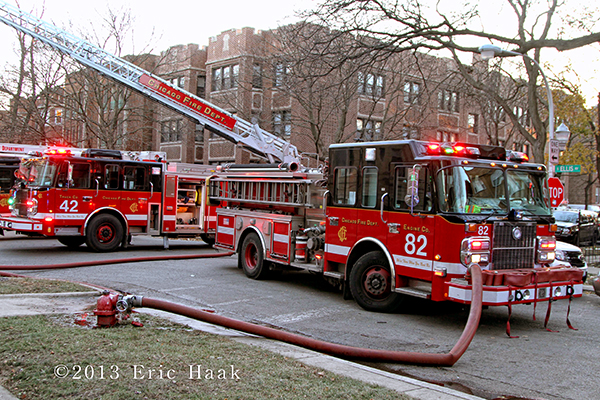 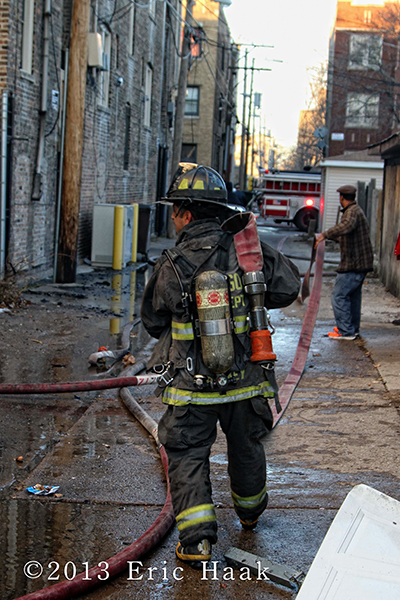 A 3rd line is brought in from Engine 72. Eric Haak photo

Companies eventually removed both garage doors and fought the remainder of the incident from the rear windows of the garage.  Engine 126 took a hydrant on Dobson Avenue, one block east of the fire and ran two lines through the gangway to the alley.  One of these lines was eventually used from a balcony of the sector 2 exposure in order to get a better POV.  The space available in sector 3 for companies to work in was very limited.  The 2-11 was struck out at 1619 hrs.  One civilian was transported from the scene in good condition. 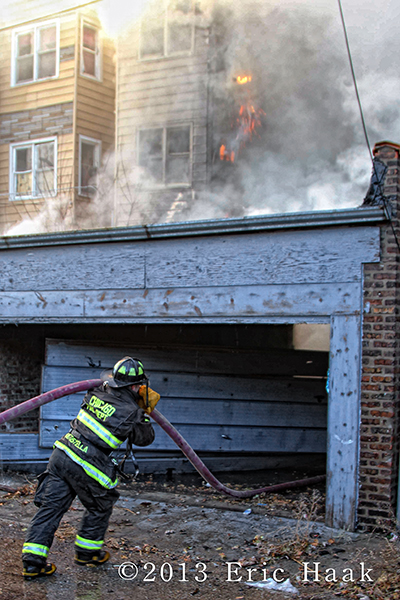 Lines are stretched into the garage. Eric Haak photo 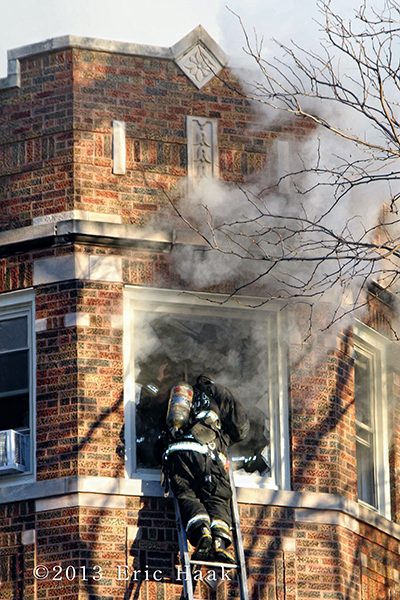 I wish I could have gotten more shots from the front with Tower Ladder 34 but the police taped off the entire front of the building and moved everyone off Ellis.  I was only able to get a few shots off before they moved us.  The goofy thing was that not much was happening in the front and the alley was far more dangerous but they never taped that off.  Go figure.

More images can be seen at chicagoareafire.com